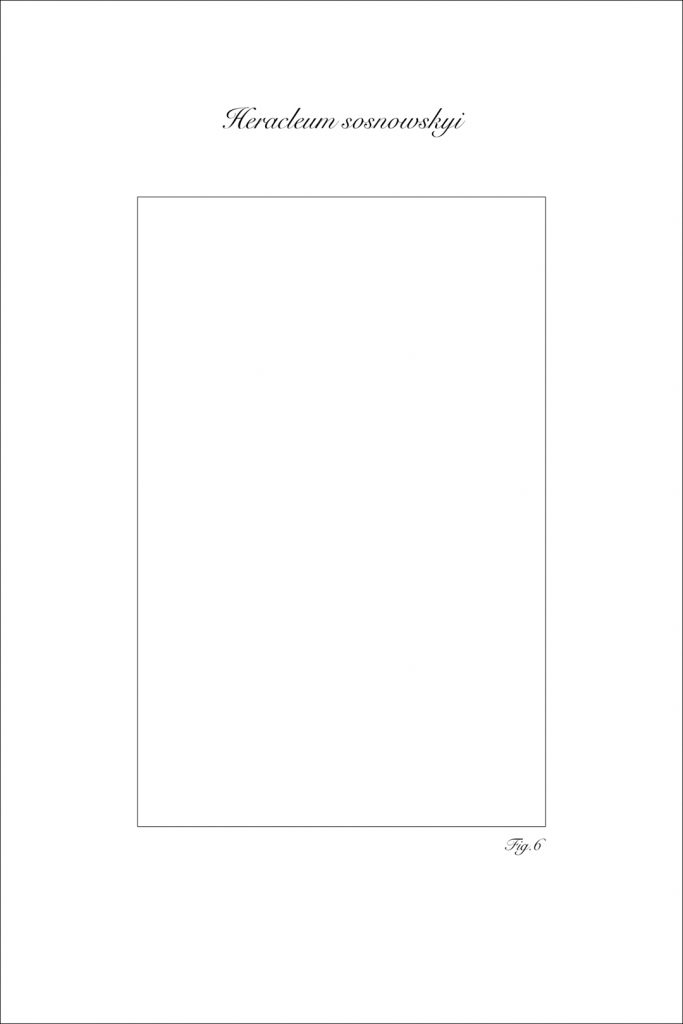 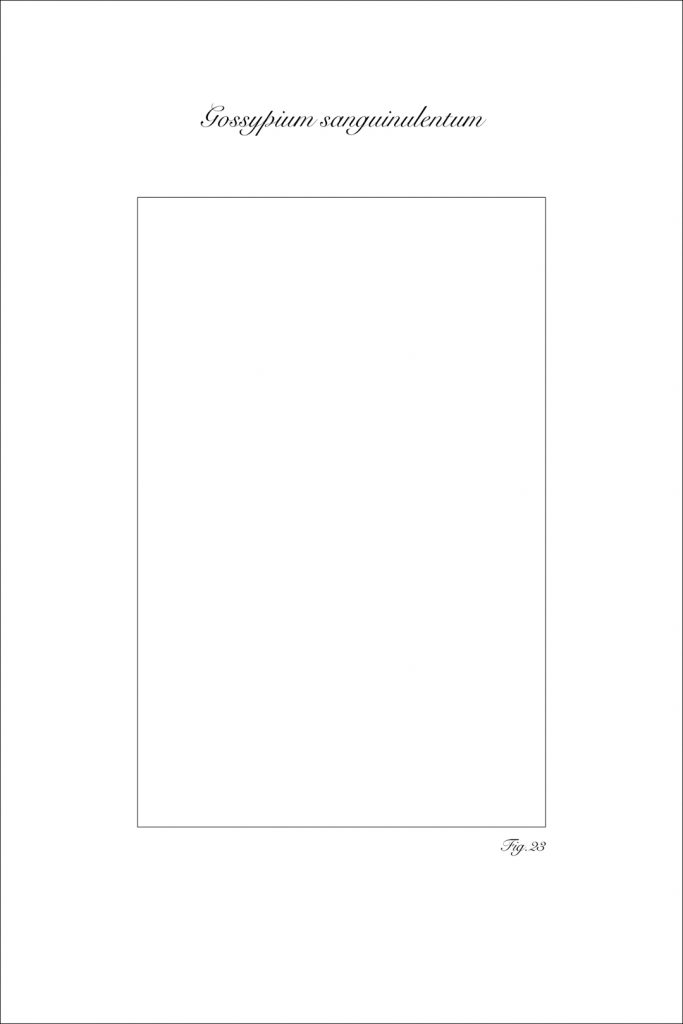 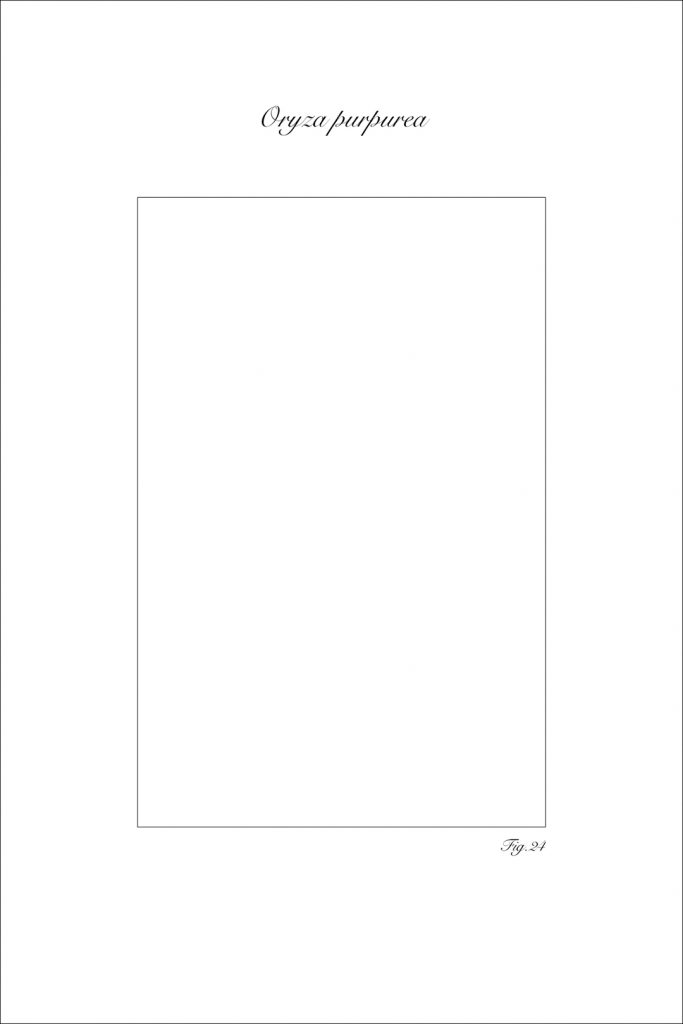 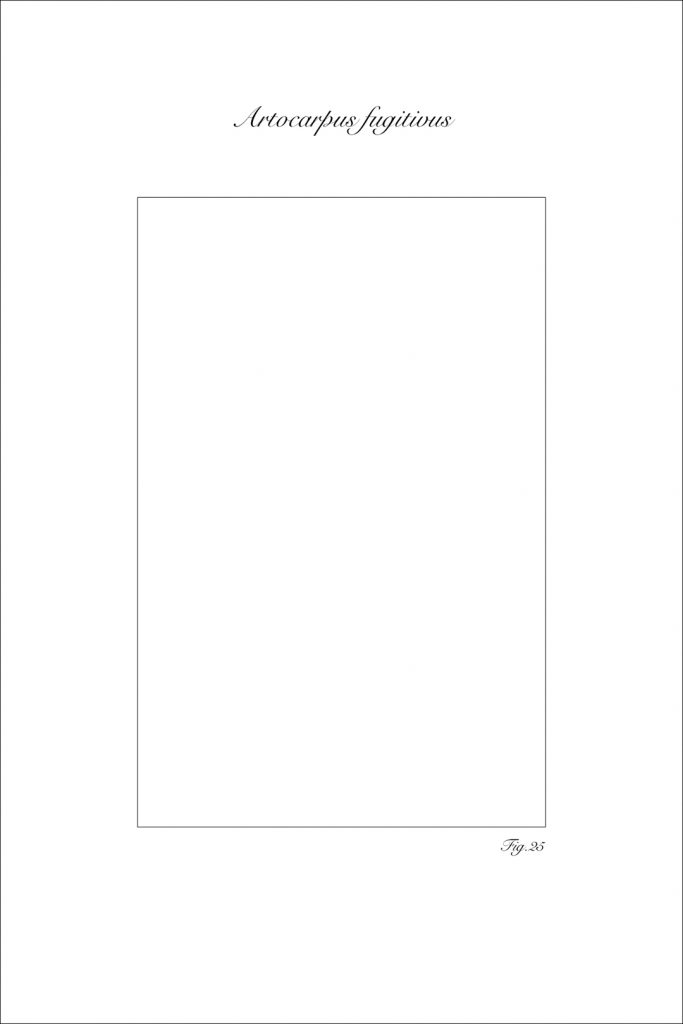 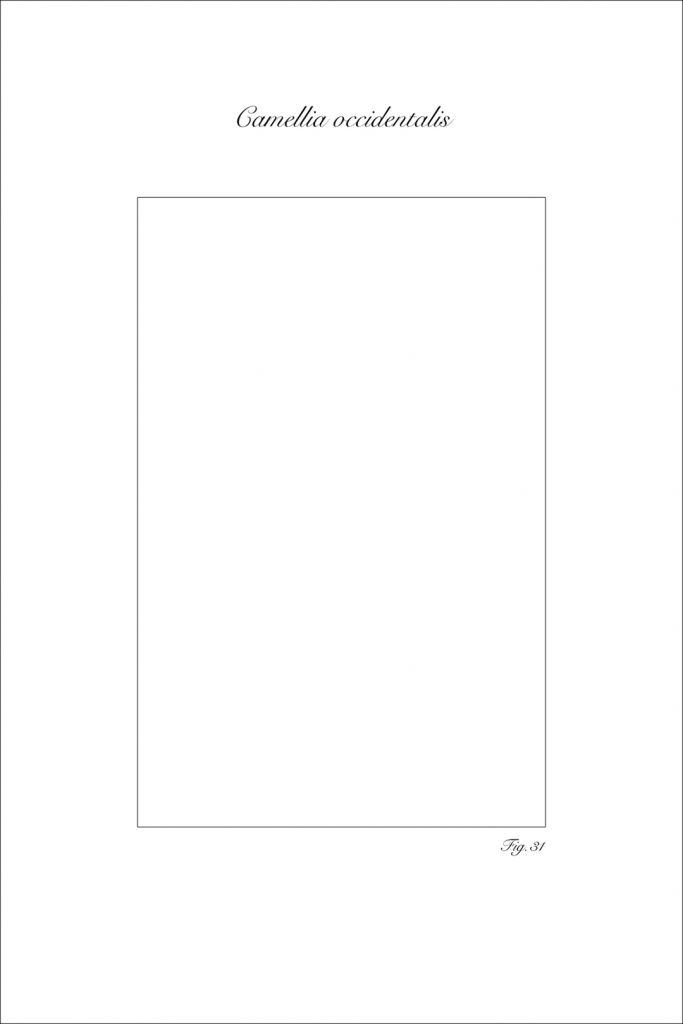 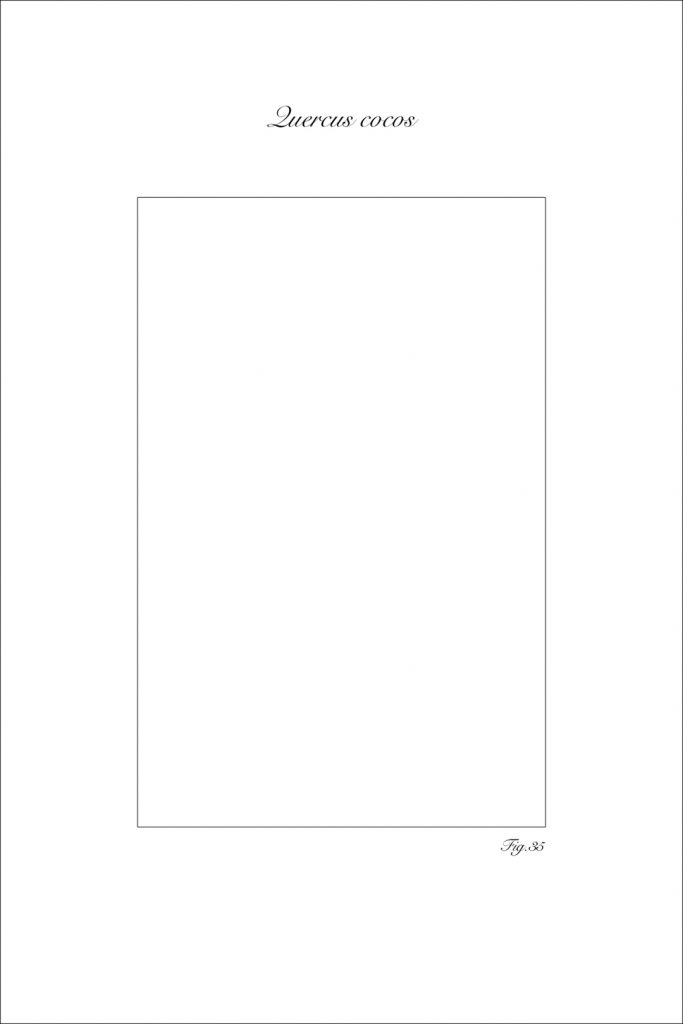 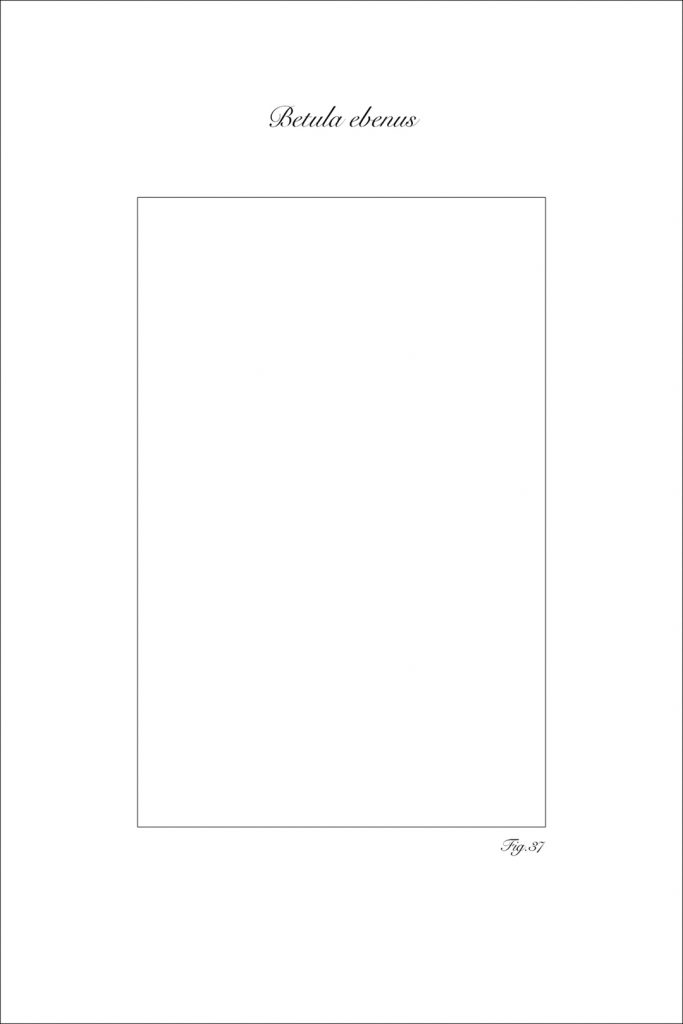 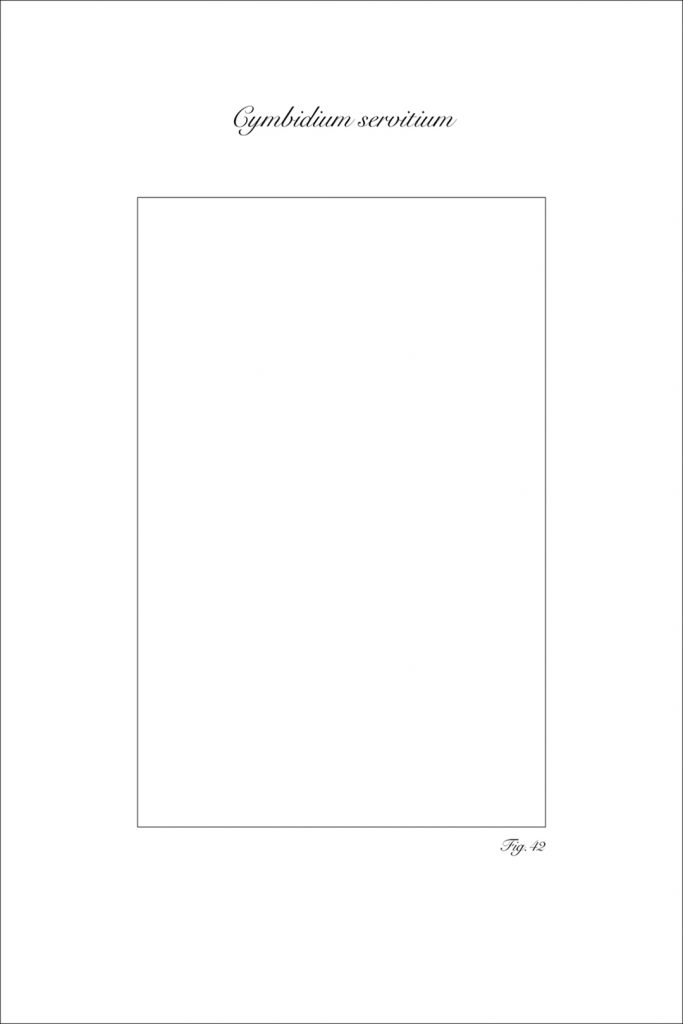 Figura Abest draws from the phenomenon of a herbarium page with its beautiful interplay between the visual and verbal. The visual satisfies the need to discover a mystery (eg. of the exotic in the context of colonisation), to learn and see the tiniest details (eg. seeds, all stages of flower, fruit growth) and also to popularize the knowledge outside the scientific contexts (with botanical illustration being not only detailed and precise but also beautiful). But it may also supersede imagination.

What happens when the visual is taken away?

Without the visual (Figura abest = absent image/shape) what remains is the decorum of words.

The idea has grown out of my research on European colonialism and landscape and power relations. I turn to hybridity – a concept which is inherent in all sorts of colonial encounters (be it biological, political, cultural).

My new hybrid taxonomies and herbaria are based on names of plants actually occurring in different parts of the world, both oversea colonies and Europe (indigenous and introduced – purposefully or unintentionally, acclimatised and invasive, etc) as well as historical, political and social contexts closely connected to the realm of colonisation.

Figura Abest is a collection of herbarium pages with Latin names (part of them made up) and with no visual representations. Some names are authentic names of invasive plants (results of artificial plant mobility intensified in the colonial era), e.g. Robinia pseudoacacia (false acacia or black locust), Heracleum sosnowskyi (Sosnowsky’s hogweed), Opuntia stricta (erect prickly pear), Solidago gigantea (giant goldenrod). The histories of their introductions and their way to „independence” (and incontrollable spread) are very intriguing and truly scary from the perspective of the endangered indigenous species. Some other names are pseudo-botanical neologisms, with some colonial narratives encoded in them – e.g. Camellia occidentalis (tea + western, originally: Camellia sinensis), Citrus fessa (orange + exhausted), Eugenia avida (clove + greedy), Saccharum alienum (sugar + foreign). Some are names of authentic hybrid plants (results of successful experiments from botanical gardens and natural hybrids), e.g. Primula kewensis (Kew primrose, invented in Kew in 1900), Iris albicans (white flag iris – a natural hybrid).

This lack of illustrations in the herbarium is very significant, probably even more significant than the lack of names. Although, according to the International Code of Botanical Nomenclature, even the best-preserved and most detailed specimen without a name is useless1, a name with no visual referent may highlight the absence and strengthen the sense of uncertainty. A hybrid name particularly calls for a visual referent – to satisfy curiosity, to compare, to classify. Some hybrids, especially human-hybrids, remained a sort of taboo in the colonial world. Fascinating on the one hand, terrifying on the other. Forbidden and unavoidable. Building up the colonial economic power and threatening it, e.g. by undermining the racial role assignment. Plant hybrids were presented as the emblems of success of colonial landscape transformation systems. Human hybrids were marginalised, pushed outside the sphere of representation, omitted, silenced, unrepresented. Figure Abest is a coded list of absences, not only colonial.

Hybridity is a very important concept when discussing landscape and power, especially in the context of colonial landscapes and transgressions, both physical and metaphorical. Empires, founded on colonial contact, mutual transformations and exchange, were doomed to hybridity, this fact was often rejected, though. The transplantations, acclimatisation, and botanical gardens are all linked to the notion of hybridisation. According to Homi K. Bhabha, hybridity is a “subversive product” of colonial systems2. It has the potential of destroying and destabilising the very system it is the fruit of. Homi K. Bhabha mentions a phenomenon discussed also by Robert Young, a paradoxical desire and rejection of the “Other”3. This category is visible in the realm of landscape. On the one hand, in many colonies there was a strong need to reject local landscapes and reproduce well-known European conventions in real landscaping and its artistic representations (grafting, re-landscaping and drafting). On the other, there was a huge fascination with the Exotic and a need to reproduce it (physically within European landscapes hybridising the metropole)4 or at least to possess its fragments (plant and animal trophies).

Plant hybrids had a special status in the colonial world. Many of them were of significant economic value (cash crops or rare specimens for collectors). They proved the effectiveness of innovative methods of control tools such as landscape. Casid points out that even though the word hybrid was rarely used until the 19th century (according to The Oxford English Dictionary), experiments in cross-breeding were carried out already in the late 18th century5. While cross-breeding of plants was an example of commonly accepted and popular colonial transgressions, a method of strengthening empires on the global market, mixing of races was commonly condemned. Plant hybrids were presented as fruits of the colonial new order, innovation, creativeness, while human hybrids were presented as evil. To effectively discourage mixed-race relationships, races were presented as separate species, and since separate species cannot produce fertile offspring, they were against God’s will6. Plant hybrids were accepted and desired, human hybrids – rejected and marginalised.

Colonial landscapes, too, were the embodiments of hybridity. Plantation is an interesting example of a hybrid – with plant hybrids, human hybrids, hybrid technologies. Hybrids within a hybrid. What happened on the plantation grounds encapsulated numerous colonial practices and could be referred to as “a hybrid production of an Empire”7. Slave gardens are specific examples of landscape hybridity referred to by Casid as “countercolonial landscapes”8 or black counterdiscources of landscape9. They were introduced on both British and French plantations in the Caribbean in the late 18th century as “Negro Grounds and Provisions”10. They were clearly hybrid – neither European nor African, neither fully controlled by colonial administration nor truly independent. Officially, they were given to plantation workers to grow crops for their own use. In practice, they were intended to bring direct profit to plantation owners by minimising the costs of food for the workers. The grounds intended for slave gardens were of the worst quality, located where no profitable farming of any cash crop was possible. Despite all the logistic obstacles, slave gardens were not only places where plants were grown for everyday use but also where successful transplantation experiments took place11. Knowledge, which white colonisers often did not possess, would be mixed there with European technologies and fruits of European artificial mobility. These gardens were not simple copies of African or European practices but a useful and successful mixture of both. They were hybrids in the purest form. Functioning on the basis of appropriation and mimicry, they threatened the plantation machinery from inside because of this apparent similarity. Slave gardens grew in strength enabling some degree of financial independence (some rare plants were sold on the black market), possibility of aesthetic expression (some slaves would grow mainly decorative plants), and finally they facilitated the resistance movement (providing food and shelter for rebels and fugitives, and poisonous herbs to frighten the plantations’ owners). Slave gardens were presented by the European authorities as doubly negative: neither orderly organised according to European gardening patters, nor picturesquely diverse12. Plantation owners would not admit that these were the places where some important transplantation and acclimatisation experiments were successfully conducted, since it would be tantamount to admitting that the agricultural success of plantations was not purely European and that colonisers were not able to act independently, relying solely on their knowledge and experience. When independence riots started, slaves were destroying what was the most valuable to white plantation owners – the plants13. Their rage was not as insane as colonial authorities tried to present. Destroying “innocent” plants was not a sign of primitive aggression but a carefully planned and perfectly logical move.